Dario Marušić was born in 1957. He spent his childhood in the North-Istrian countryside in direct contact with the Istrian traditional music. He began exploring Istrian music as early as in high school and started collecting the material he later published in numerous articles and three books: “Predi, predi hći moja”, “Piskaj, Sona, Sopi” and “Strumenti e tradizioni tra Friuli e Istria”.
Marušić has participated in numerous research projects on fiddling, traditional singing and Istrian pipe playing and he has had an important role in the revitalization of traditional groups, music and musical instruments of northern Istria in general. He has collaborated with several musical groups and musicians like Angelo Branduardi (Futuro antico II), David Shea (Poem de nuestra signora), The Chieftains and with the Philharmonic Orchestra of Ljubljana.

In addition to collaborations, he performs as a soloist with his group IstradMarusic and engages in research, teaching and leading music workshops of Istrian music.
He worked on the preparation of the “Istrian Ethnomusical Microcosm” funded by the Croatian Ministry of Culture, which was the Croatian proposal for the UNESCO Proclamation of Masterpieces of the Oral and Intangible Heritage of Humanity. At the moment, he is working on a research project “Praksa viulina i bajsa u Istri – La prassi del violino e bassetto in Istria”. Up to date, he released 16 albums.
Here are some awards and praises he received:

– Silver Plaque of the municipality of Koper / Koper 1989,

– Golden Plaque of the municipality of Koper / Koper 1992,

– Award for contribution to the preservation of the Istrian identity Alojz Kocjančič 2001.

– Cultural environment of Istria, more specifically in the area where violin tradition was developed

– Technical characteristics as the basis of style

– Relations with other musical instruments when playing together 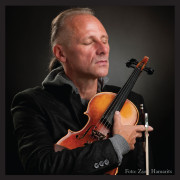